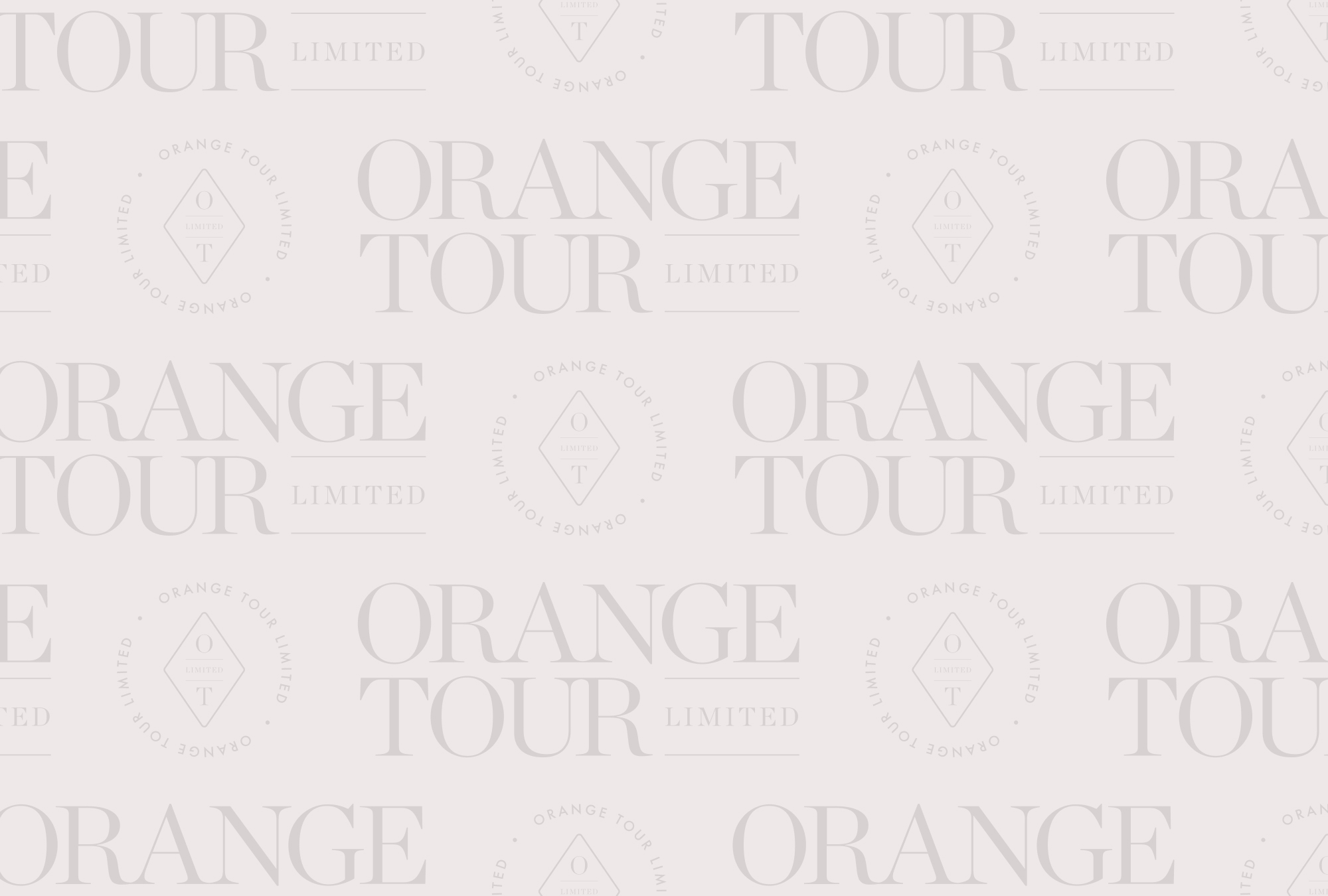 Orange provides training and resources to help churches do effective ministry, and each year speakers from their network embark on a tour across the U.S. to inspire and equip church leaders in their local ministry at one-day events. In light of the COVID-19 pandemic, Orange set out to craft a limited tour experience for their 2021-22 season with smaller in-person events that would allow for attendees to gather safely in key cities. They reached out to me at the beginning of their process to help them build a brand system for the tour and attendee experience. 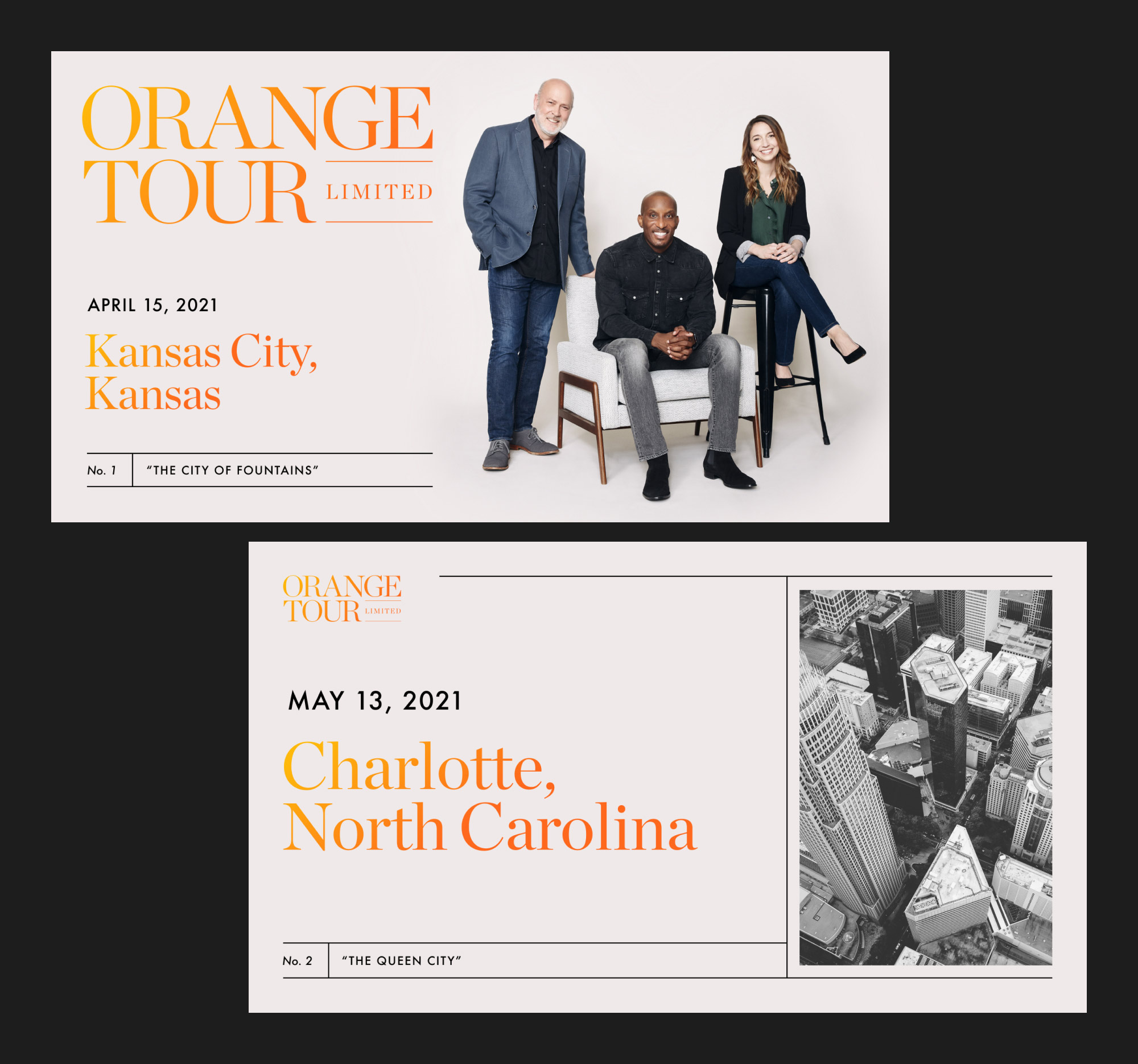 Orange is well known for their curriculum—over 8,000 churches partner with them—and their brand presence has leaned into a relatively "young" design tone over the years. With this tour brand, Orange hoped to move toward a higher design sensibility, with cleaner, more organized, and overall more professional elements at play.

When I was invited to the process, Ashley Shugart, Orange's brand director, had already begun to center the brand around a photoshoot with Orange Founder & CEO Reggie Joiner, Orange president Kristen Ivy, and Dr. Dharius Daniels, who would serve as the hosts for the tour stops. She had also established a type lockup that would serve as a leading brand element, and I built a brand system around those elements to encompass marketing, on-site signage, and a digital event guide for attendees to use during the day at each stop.

To create an editorial and upscale feel for the system, we landed on Chronicle Display by Hoefler&Co. and Futura, typefaces that Orange had used sparsely in the past, and anchored them in a minimal color palette of neutral cream, bright orange, bright yellow, and black. These typefaces help to push Orange toward greater sophistication in their brand while maintaining the friendliness and approachability for which they are known. 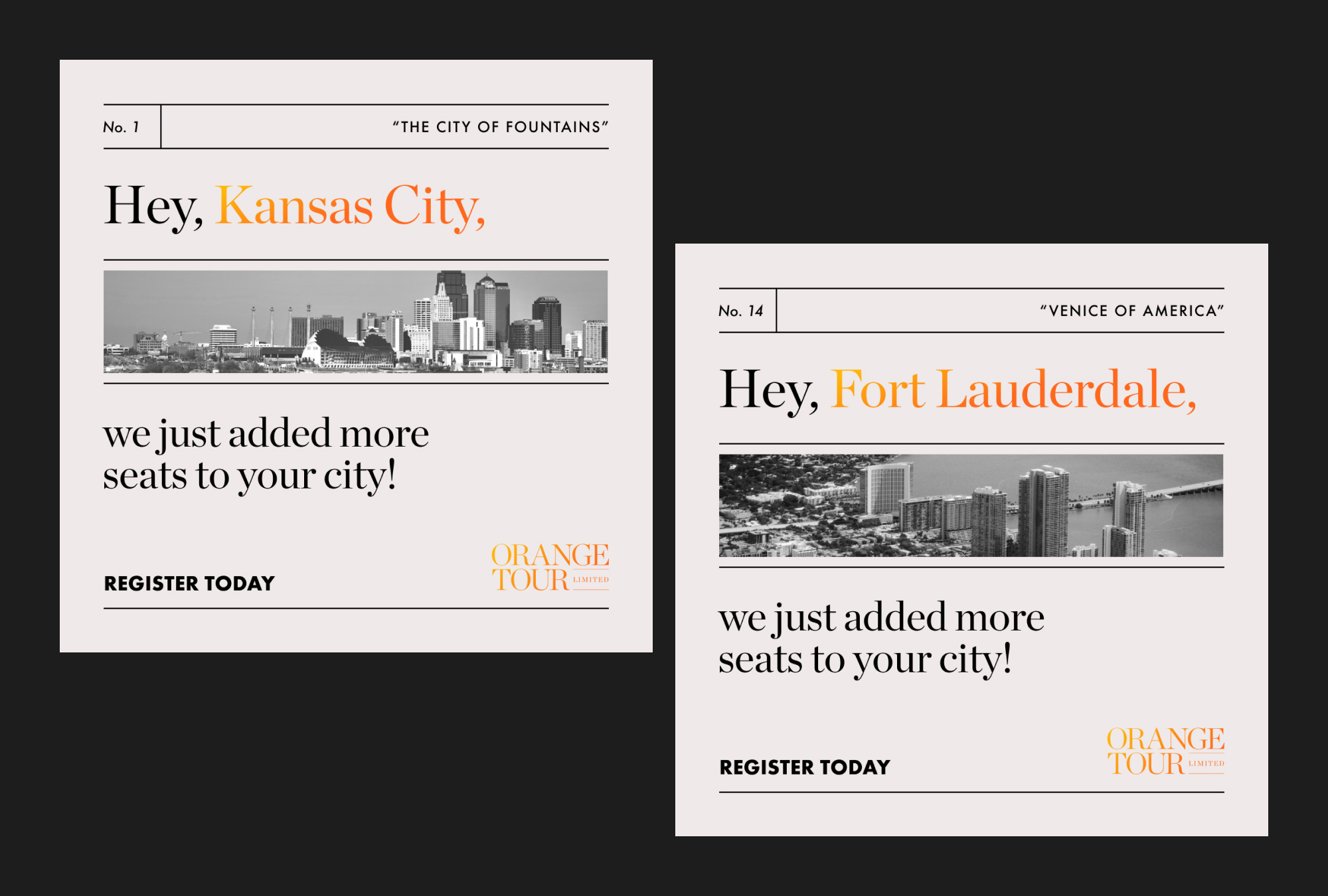 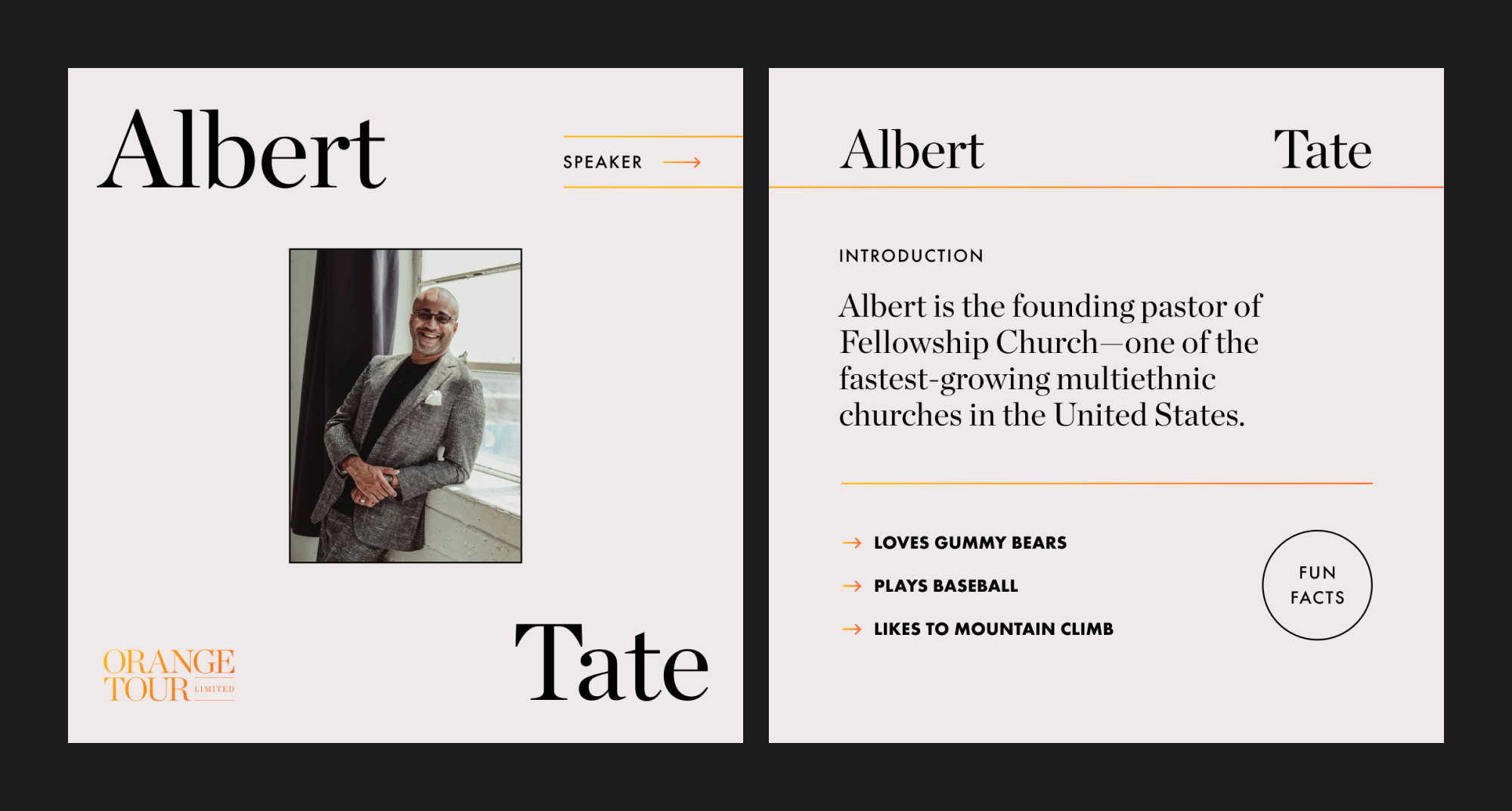 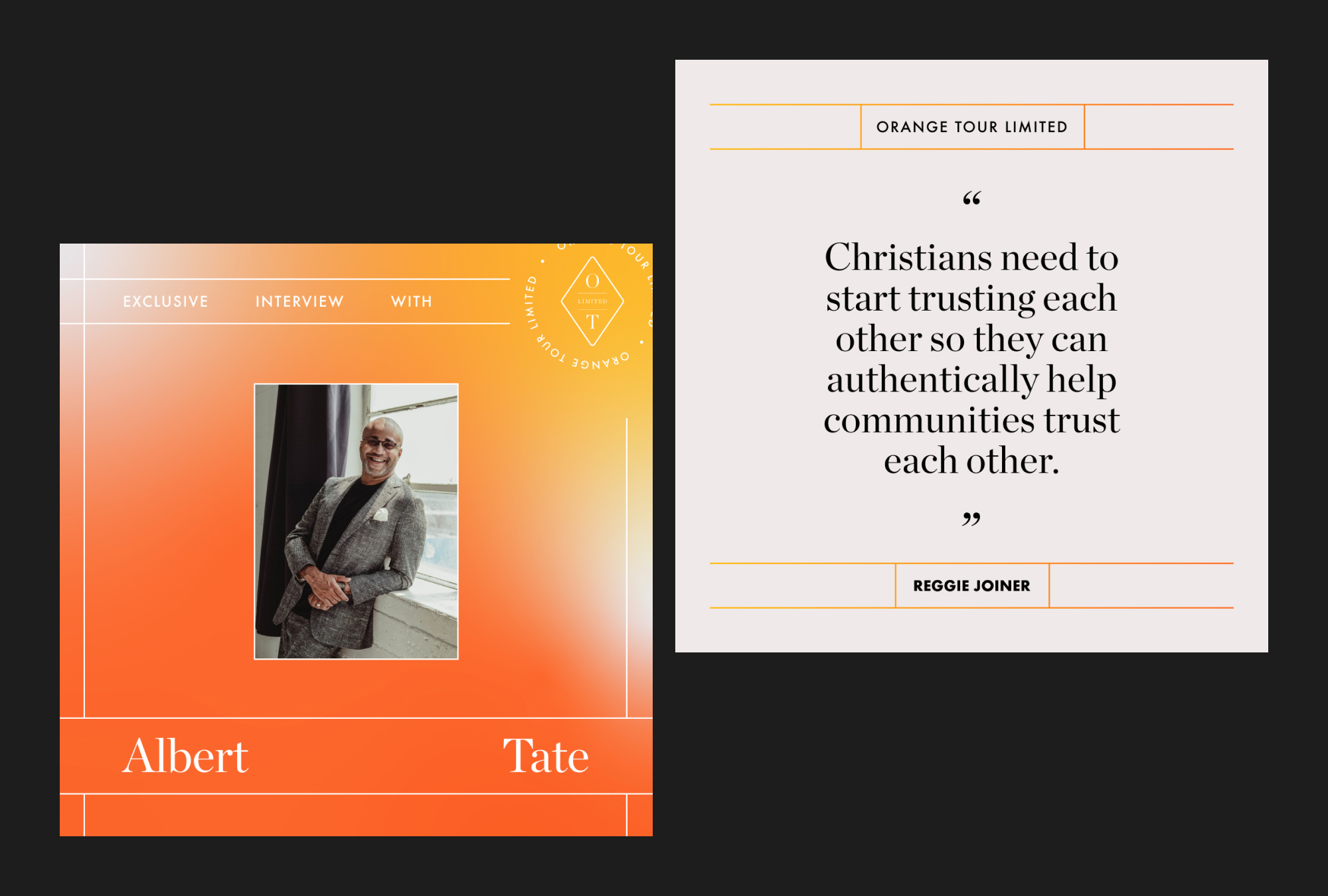 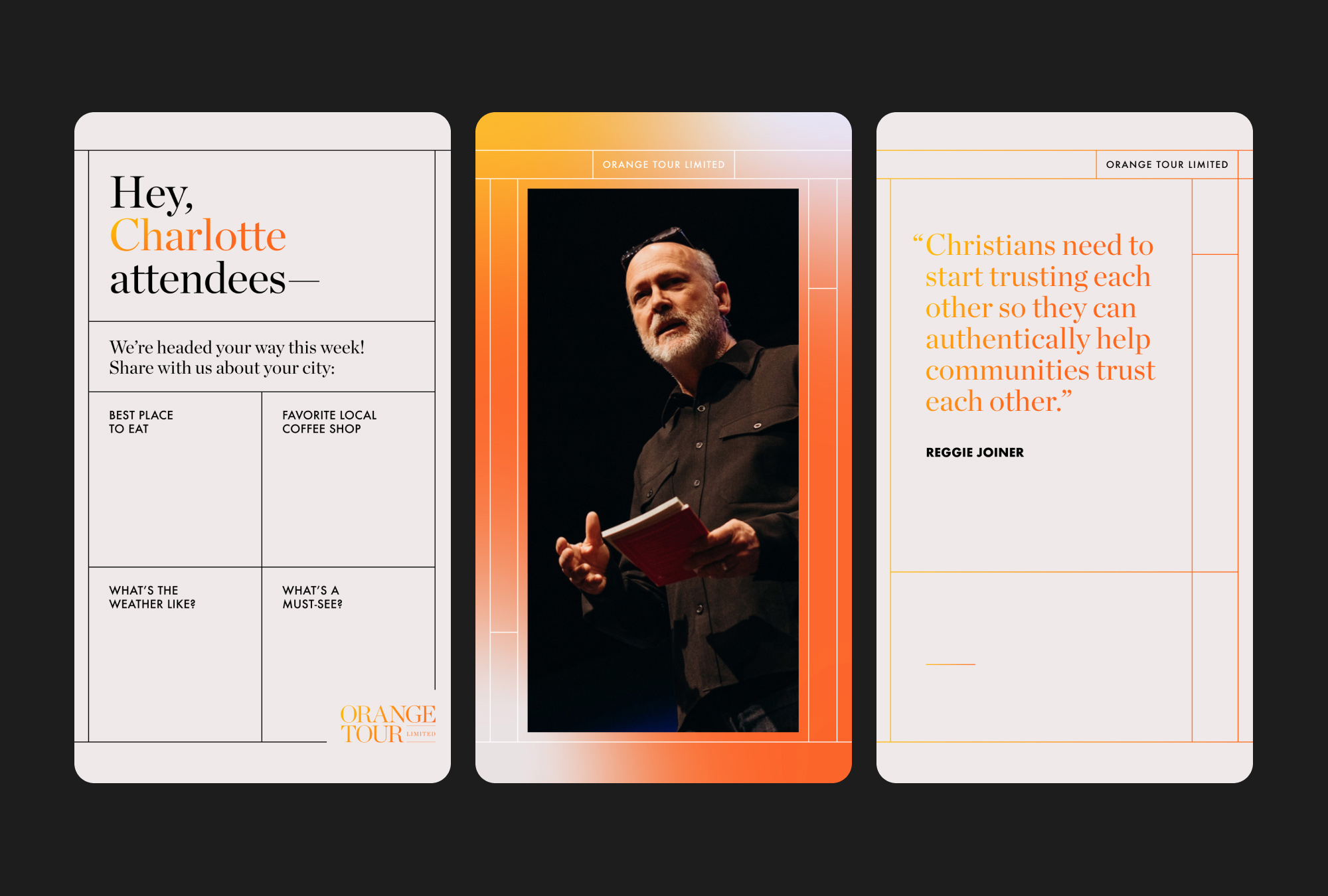 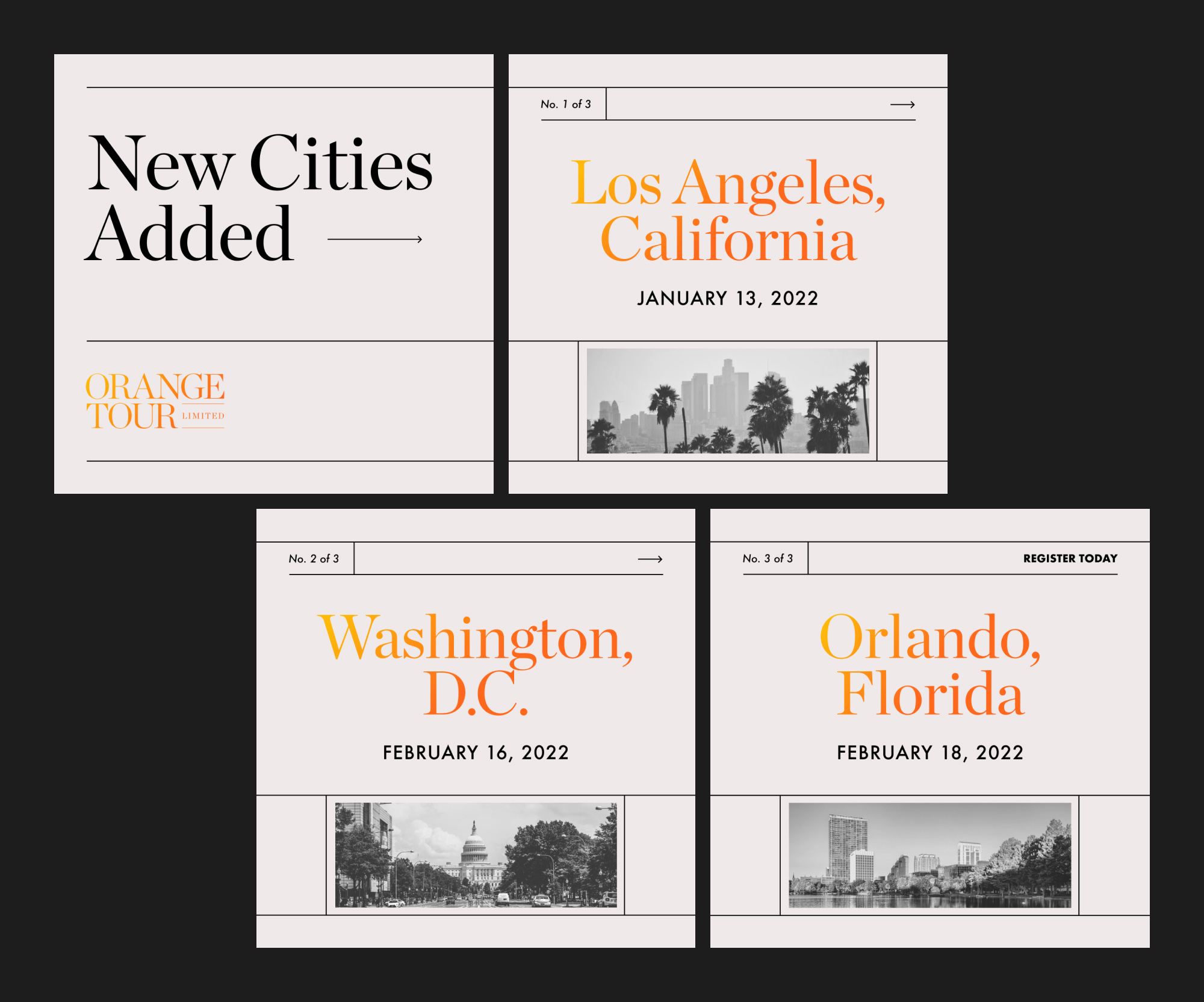 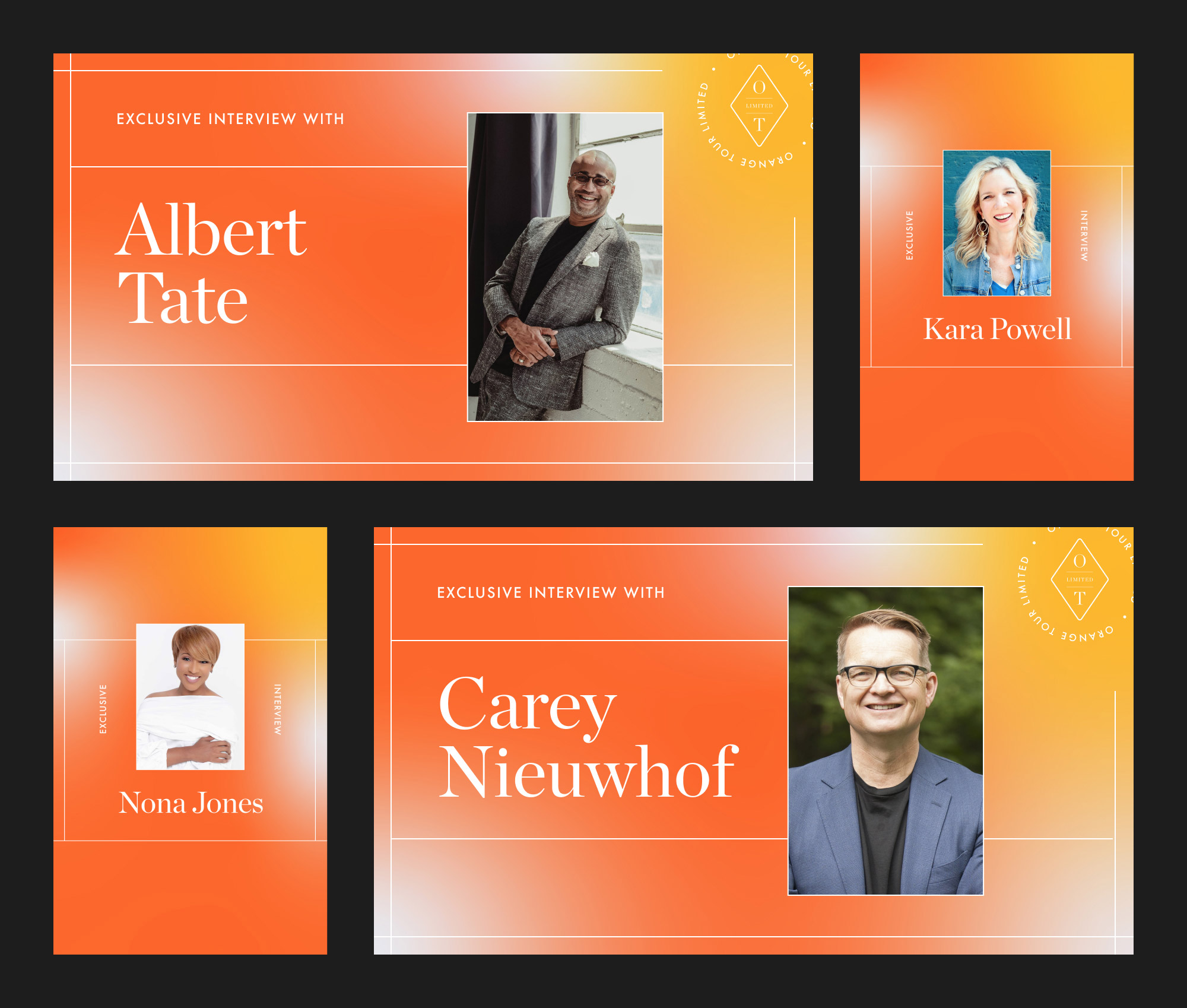 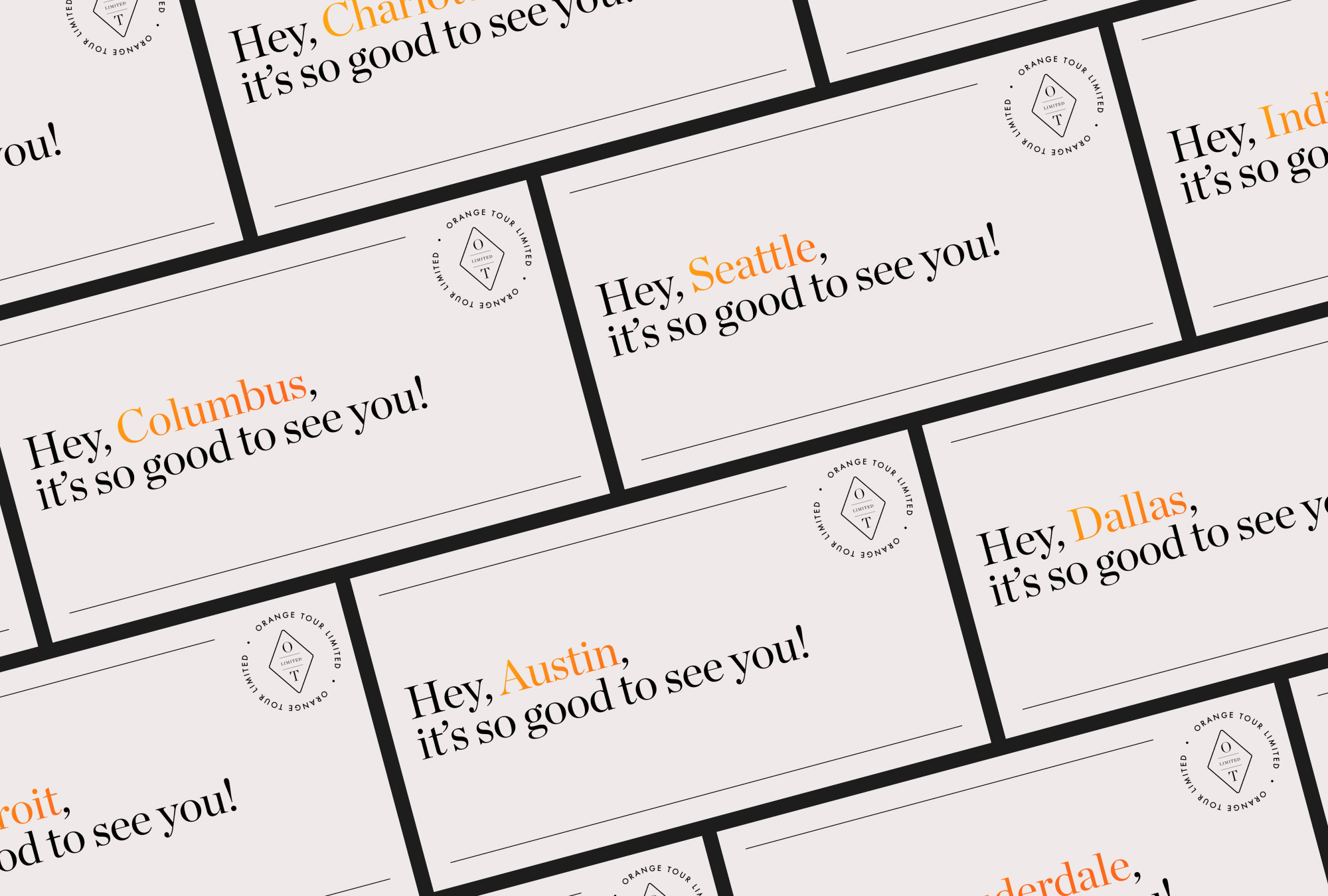 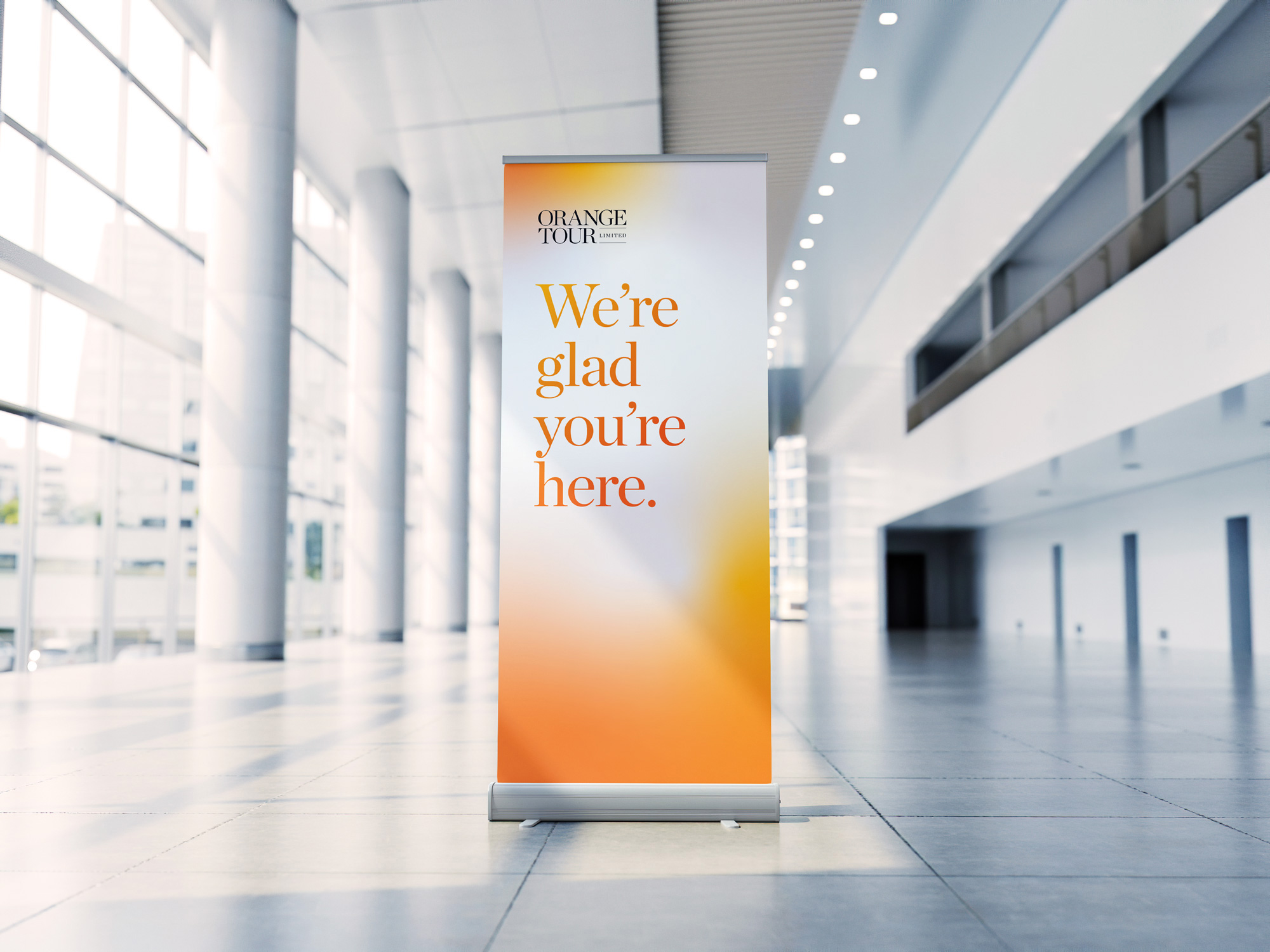 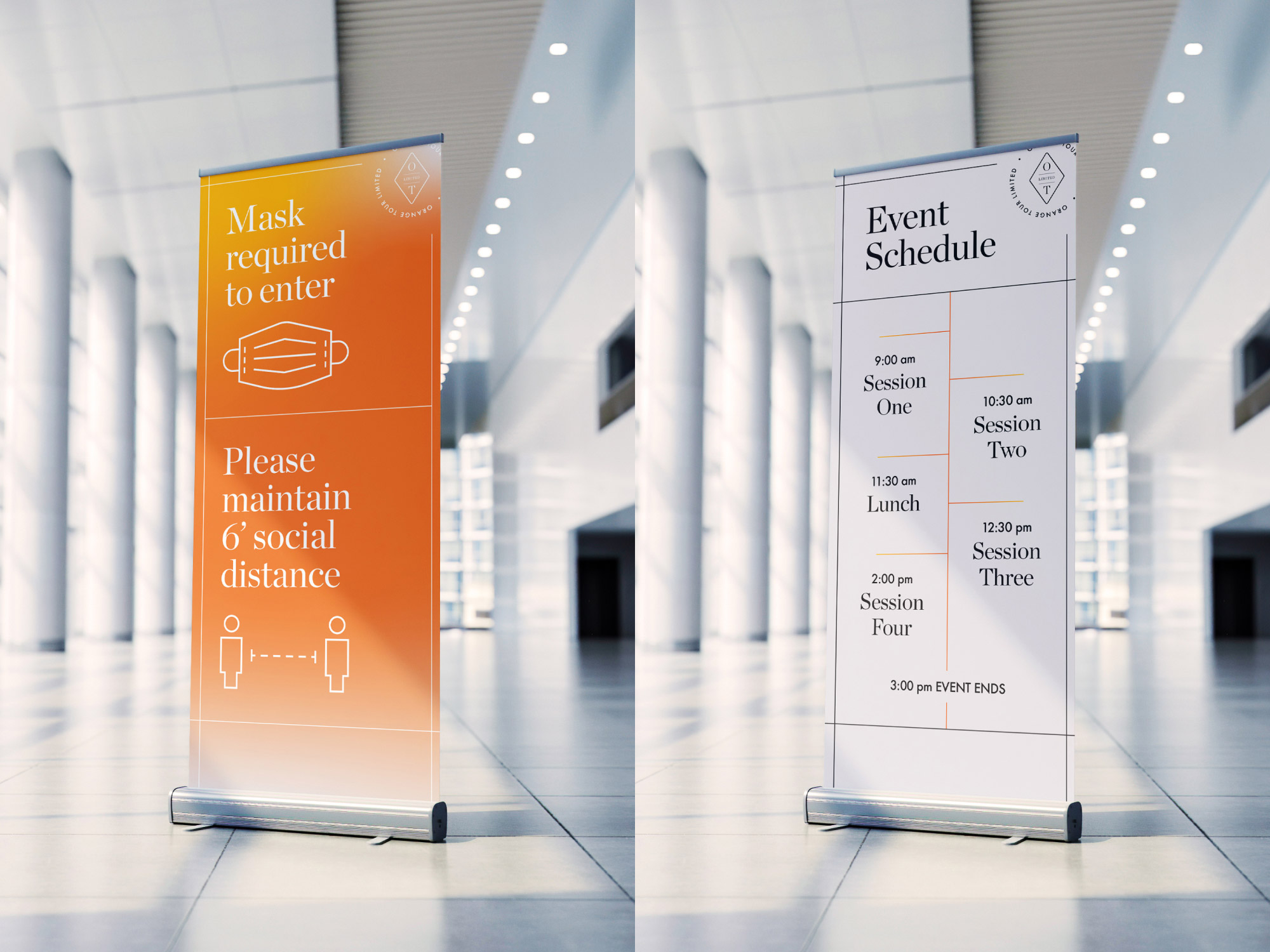 With subtle calls to newspaper and magazine layout, I expanded the system to use grid lines and small type to create larger copy areas, and emphasized Chronicle in these larger areas. To further the "limited" feel of the brand, I incorporated a typographic seal to support the main type lockup. As a vibrant and warm contrast to the neutral backgrounds, I employed freeform gradients in video posts. Put all together, this system allowed Orange to maintain a cohesive brand presence for Orange Tour Limited on their social channels, where they promote a wide variety of resources outside of their events.

For on-site touchpoints, I applied the system to signage and an attendee guide. In an effort to reduce print costs and minimize contact with attendees, Orange wanted to make this guide digital, a move that had been successful in a previous, online-only event during the pandemic. I created an interactive PDF guide optimized for phone screens with navigation that attendees could use to learn about the hosts, access exclusive content from speakers, and even find local restaurant information. This PDF solution fell somewhere between an event app and a traditional website, allowing for high flexibility and a small footprint to maintain without requiring any development.

I've had the privilege to work indirectly with Orange and their events for a number of years, and it was an honor to work directly on this tour brand with them. Visit them at their site or on Instagram to keep up with what they're doing to affect the next generation of the Church. 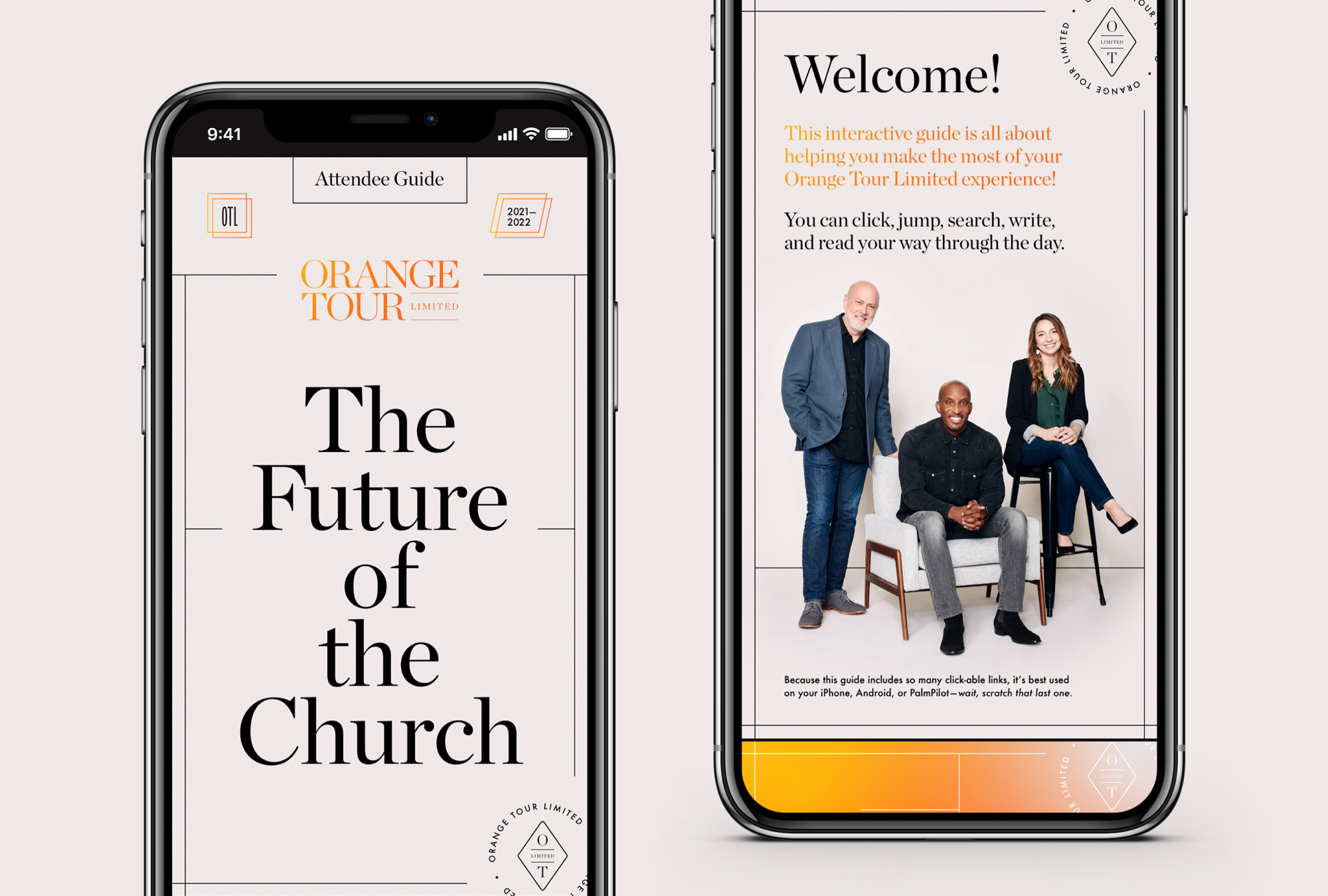 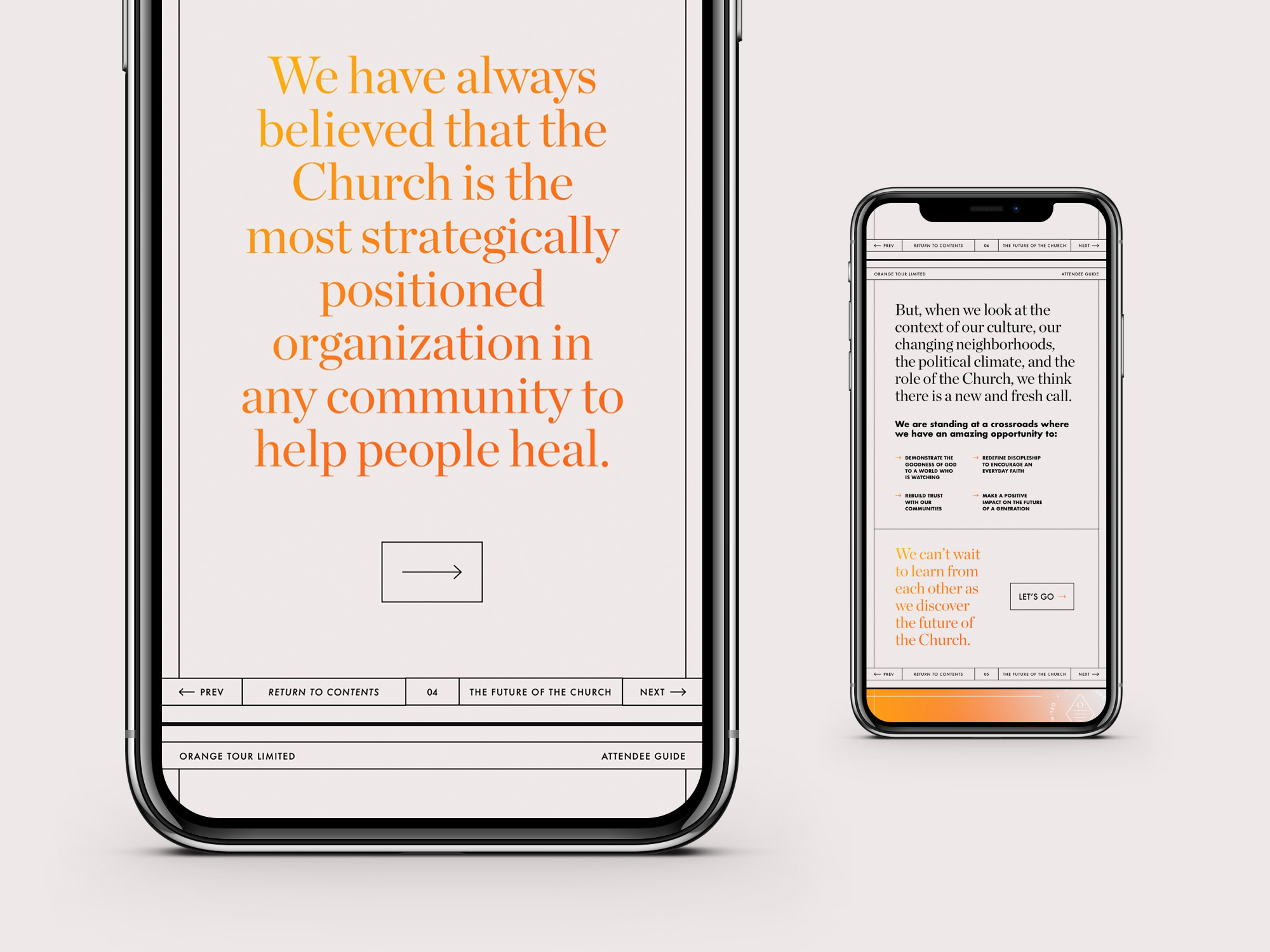 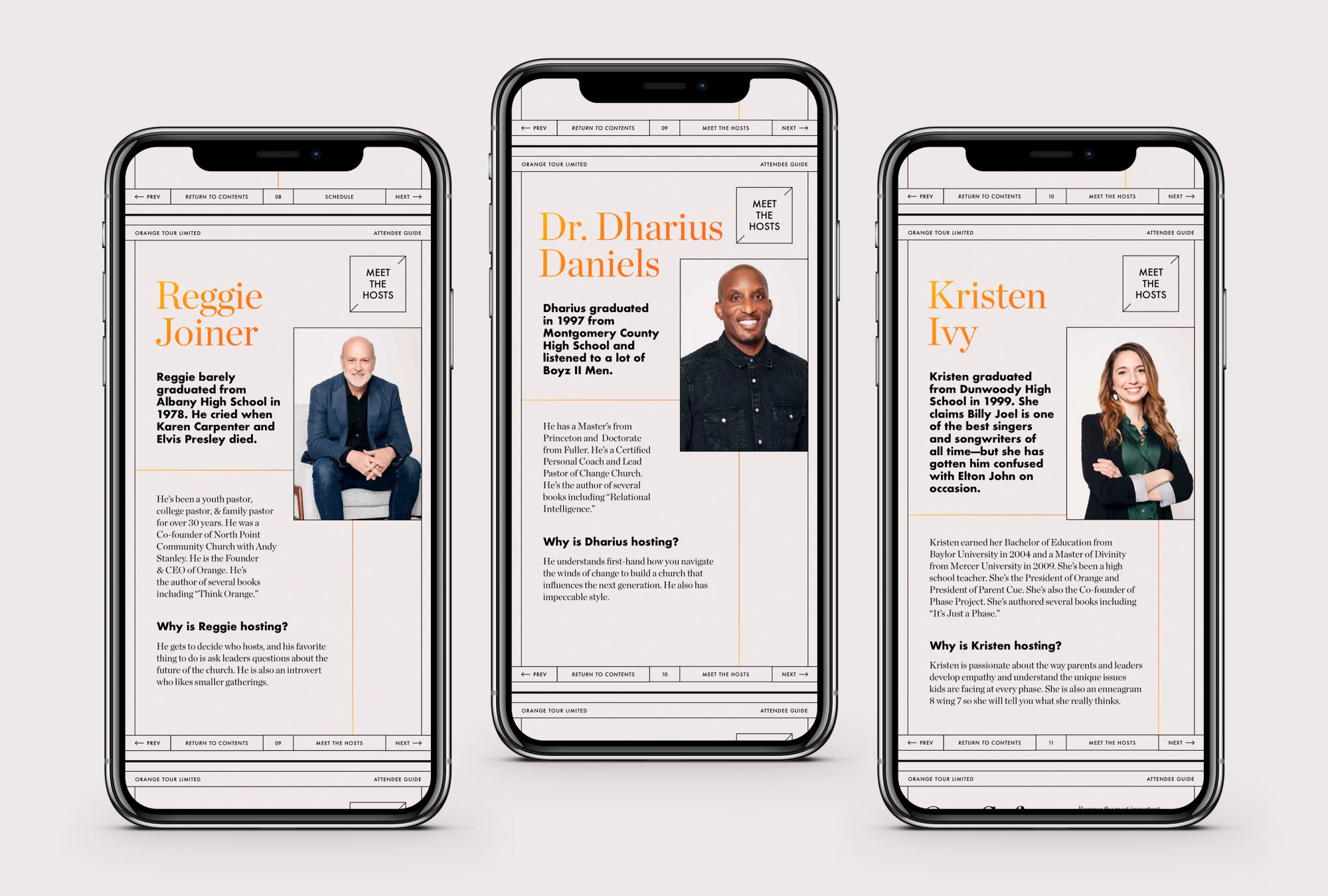 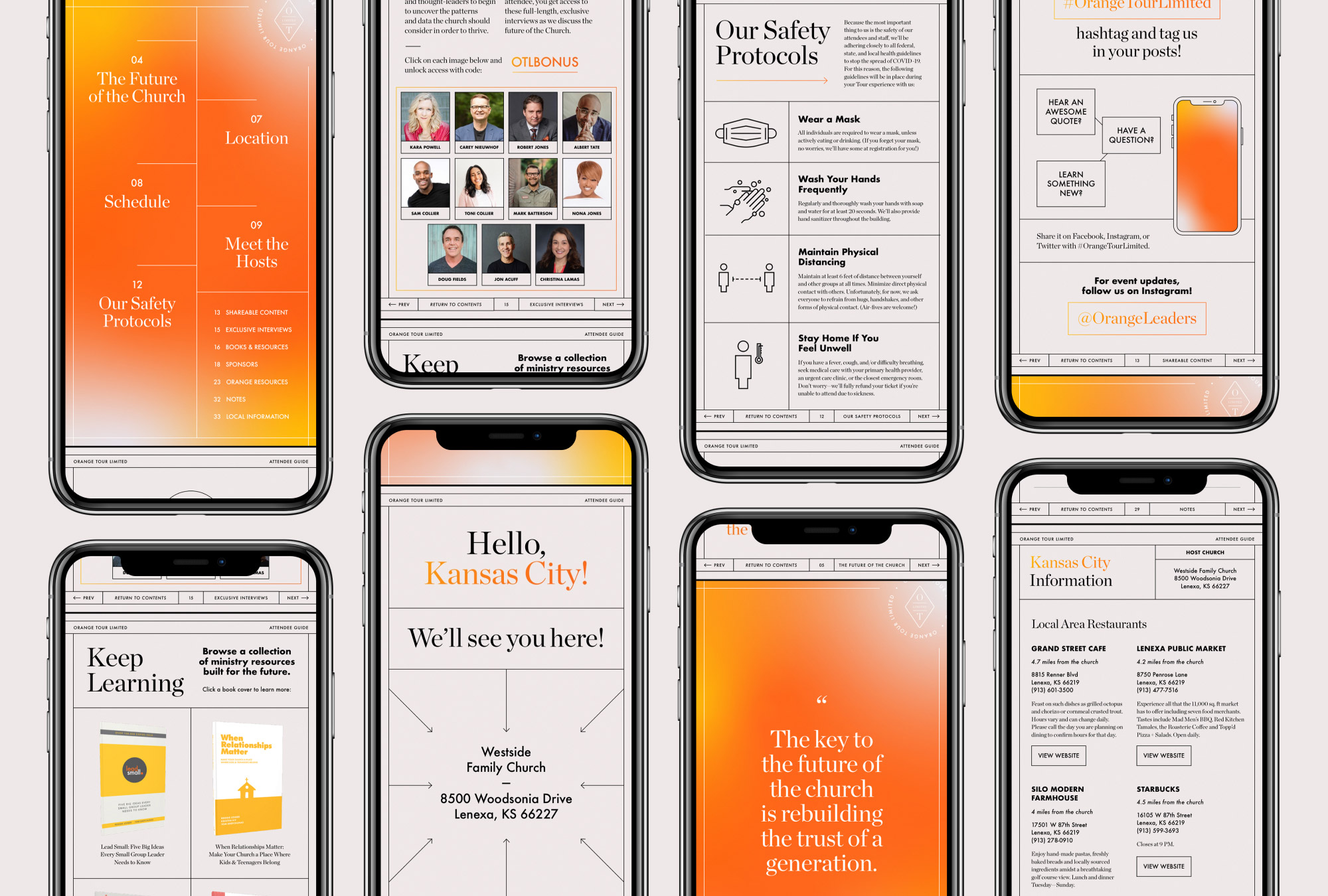